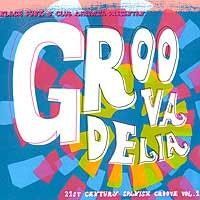 The Contemporary Spanish Side Of Groove Now is the time and this is the place. The infectious influence of black groove and rhythms has, after many years, finally come to fruit on in Spain. At last we have a generation of bands and musicians who have picked the tradition of syncopated rhythms, and this compilation proudly presents them to you. This is an extensive sampler that serves as a window display for a scene booming with energy and ideas, a scene that isn't limited to bands and musicians but that also extends to clubs and written publications that have been germinated by the groove seed. Enlace Funk is now celebrating its tenth anniversary in the business of spreading these sounds. When it started back in 1996 there were a lot less bands and a lot less clubs where one could dance to this music, and the mere idea of a compilation such as this one wouldn't have even been considered. With consistency and tons of enthusiasm, Enlace Funk has managed to get its foothold in the publishing scene of our country. Reports and interviews with the biggest names in the history of black music, from Isaac Hayes to George Clinton, from Tower of Power to Earth Wind and Fire to name but a few, have been written in its pages. This is a work that has been carried on by an incredible staff of writers, probably the biggest connoisseurs of the genre in our country, and done with an independent, non-commercial goal in mind.TRACKLISTCD11. Royale 2006 (Guateque All Stars)2. Thriller (Speak Low)3. I Turned You On (Phat Fred)4. Freedom (Funxplosion)5. La Chica Humeda (parte I y II) (Ortophonk)6. Friday Night (Pybus Groove Quartet)7. I Got You, Man! (The Sweet Vandals)8. Good Luck (Mojo Project)9. Get Up And Dance (Funkdacion)10. Wake Up! (Donatore Di Groove)CD21. Get It & Get It On (extended version) (Clan Club)2. Tu M'énèrves (Cinnamon Gum)3. Say It Loud!!! (Celofunk) 4. Pampi's Groove (Asstrio) 5. No Good 4 Me Now (The Funk On Me)6. Soul Drummer (Los Fulanos)7. Potato Jumpy (The Cherry Boppers)8. A New One (Watch Out)9. Change Your Move (Koniec)10. Think (The Sir Aligator's Company)