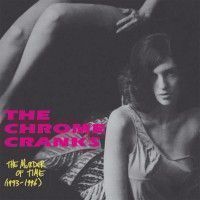 New York City monsters of noise swamp-blues CHROME CRANKS are releasing on BANG! Rcds. an 19 track compilation of their loudest and angriest tracks recorded during the 90s. THE CHROME CRANKS got their own place in the top of the NYC scene of noise blues with their burning music destilled with distortion, feedback, fuzz and anger based on blues.Coming from the music of bands like The Scientists or The Gun Club, through the years THE CHROME CRANKS got to the same level of influential band as these other ones.This legendary band includes among its members people such as Jerry Teel (HONEYMOON KILLERS, BOSS HOG, KNOXVILLE GIRLS, BIG CITY STOMPERS etc) and Bob Bert (PUSSY GALORE, SONIC YOUTH, FIVE DOLLAR PRIEST etc)It is being remastered by the band and released in a deluxe edition on triple cover digipack CD and limited edition double & gatefold LP, with exclusive texts and photography. Stay tuned as the band says they_re getting ready to play live again more of their incendiary concerts!!!