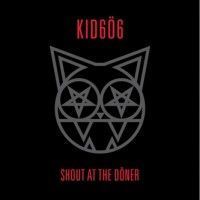 Easily Kid606's most accomplished record to date, Shout at the Dner combines all the brash and exciting plunderphonic and sampledelic elements he is best known for with a whole new world of uncharacteristically musical and danceable hooks and styles which are both fresh and timeless. 606 draws on some of his biggest electronic influences like LFO, AFX, Mike Ink, Green Velvet, Mouse on Mars, the Prodigy, Daft Punk, Shizuo, Mr. Oizo and Giorgio Moroder, to make bold and powerful songs about the decline of America, leaving California, broken hearts, drunken hook-ups, social phobias, soulless partying, economic downfall, gnarly basslines, ego worship, moving to berlin, diva vocals, baltimore club, obsessive compulsive disorder, the best parts of horror movies, acidhouse, ADHD, shameless irony, speed garage, megalomania, LSD, satanism and the ever prevalent Dner Kebab, arguably europe's best late night cuisine to consume on the way home from from the club, (Especially if you had to much to drink!). We think this release is the Kid's first successful stab at what we like to call "schizotronics" actually combining elements of many different Dance music styles into new songs without pretension,trying to hard to fit into any trendy genre, or losing the joy and energy of the driving beats and basslines that make music so fun in the first place. Maybe it's intelligent dance music for people who thought they didnt like intelligent dance music, Maybe it's unintelligent vacant technopunk trash, Kid606 is Headlining the overkill stage July 18th at Glade 2009, as well as playing clubs and festivals across Europe, UK, Japan, China and Australia all year long.