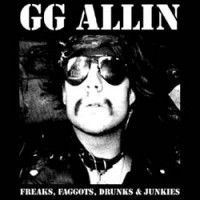 Vinyl edition of what is probably GG Allin's greatest studio album. This was GG's fourth album when it was originally released on Homestead Records in 1988. Recorded with a backing band featuring members of New England punk/thrash heavies Psycho, this one contains some of GG's best songs. "Die When You Die" is arguably the most famous GG Allin song and this album features the original, best version of the live warhorse. It also includes GG's rewrite of David Allen Coe's "Longhair Redneck" titled "Outlaw Scumfuc." The punkest man alive (at the time) at his peak.

Allin, Gg
Always Was, Is And Always Shall Be

Bad Religion
The Process Of Belief

Varukers
One Struggle, One Fight