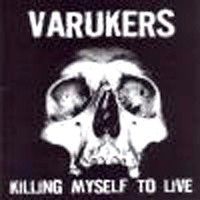 Varukers
Killing My Self To Live

30 years of punk rock - if that hasnt killed ya then nothing will, The Varukers started in 79 and since day one hit the streets running, never satisfied with their lot their constant hard touring, hard drinking and hard hitting music has kept them at the top of their game, you got to be in it to win it, if The Varukers started holding back they would be scared of missing out on something, so as usual full speed ahead its their 30th year to get on the road. The downside i suppose, if their is one, is that because of the bands constant touring, it leaves quite a gap between actual releases - the bands last full album release was 2002 "How do you sleep?" and time before that was 1998s "Murder" album. Never one to disapoint this release kicks in with a no compromise dig that no matter how much you give some bastard still wants their pound of flesh! I think these guys give more than enough.

Varukers
How Do You Sleep?????

Varukers
Another Religion, Another War