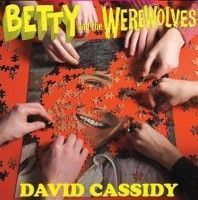 Betty And The Werewolves
David Cassidy

Betty and the Werewolves are three girls and one boy from London who whoop and howl through the night as sweetly sung melodies collide with glitter-struck punk guitars. Taking inspiration from luminary lycanthropes Virginia Woolf and Grandma Wolf, they sing ditties about falling in love with David Cassidy and strange encounters on night buses, shouting all the while and scuffing up their party shoes. This is their wonderful second single following their debut 7" last year on DG called Euston Station and its a homage to 70s super pop pin-up and Partridge Family member, David Cassidy. Its backed with another live favourite Plastic The Werewolves recorded this just after their recent tour dates with Fucked Up, who have been telling anyone that will listen that BATW are their favourite band in the world. This single will hopefully plug the gap for those who cant wait for the debut album which is due out later in the year.

Chaos U.k.
Heard It, Seen It, Done It