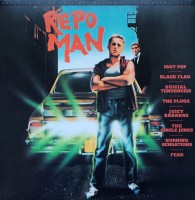 Repo Man is the soundtrack album to the eponymous 1984 film, Repo Man. The soundtrack features songs by various punk rock bands such as the Plugz, Black Flag, the Circle Jerks, Suicidal Tendencies, Iggy Pop and others. The film score was created by Tito Larriva, Steven Hufsteter, Charlie Quintana and Tony Marsico of the Plugz. Iggy Pop volunteered to write the title song after his manager viewed a screening of the film.

Livids
Your House Or The Courthouse