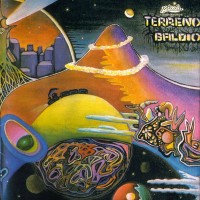 Terreno Baldio is hailed as one of the leading progressive rock bands from the seventies in Brazil, from its surrealistic album art to its equally interesting music, translates the feeling of wasteland to an alternative world of beauty and complexity, achieving worldwide popularity over several essential albums lists.The homonymous work Terreno Baldio, released in 1976, was an active part of a whole scenario of youth suffering from strong political repression, representing in the song Grite (Scream) the desire of all Brazilian society that yearned to express its voice with freedom, being an impressive moment of collective catharsis in their live performances.Originating in Sao Paulo in the early 1970s, it released its debut album in 1976, recorded on 4 channels. Formed by Mozart Mello on guitars, Roberto Lazzarini on keys, Joao Ascençao on bass, Jô on drums and Joao Kurk (Fusa) on vocals and percussion.TRACKLISTSIDE AA1. Pássaro AzulA2. Loucuras De AmorA3. DespertarA4. Agua que CorreSIDE BB1. A VoltaB2. Quando As Coisas Ganham VidaB3. Este É O LugarB4. Grite

Vibravoid
Wake Up Before You Die

Rubia
Only For Lovers