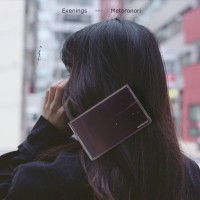 "Dreams are painful experiences; they are not real, but they are true," says Metoronori, whose very own 'Evenings' will finally see the day of light on vinyl thanks to Spanish reissue label Glossy Mistakes.The label's first release of 2022, by Japanese musician Metoronori, whose electronic sounds have previously appeared on Orange Milk Records and Virgin Babylon Records, will mark the start of a busy year for Glossy Mistakes. After appearing for the second year in a row on the prestigious 'Best reissues of the year' list for The Vinyl Factory, the label continues its own discovery path with what is meant to be one of its most cherished releases to date.'Evenings' is a unique and nocturnal collection of songs. The 13-track record came from an unstable few years for the artist, during which she found solace in the night-time atmosphere of the various Tokyo wards that became her home. A voiced ode to dreams.With her musical alias as a fun play on words meaning 'metro rider', 'Evenings' is a seamless and insular night-time journey from Metoronori, real name Hikari Okuyama. The journey though isn't charting train tunnels and rail tracks, but various dreamscapes, as underpinned by electronics and hints of free jazz.While musical influences are too broad to pin down for such a singular sound, 'Evenings' comes with visual inspiration from esteemed directors such as Michelangelo Antonioni, Kiyoshi Kurosawa and Fritz Lang. Surrealism and noir bleed through the sounds, making for the visual texture of an out-of-context movie scene, much like part of a dream.Dream pop sounds merge with ambient pads, soft vocals and oniric instrumentals throughout the whole piece, on a rollercoaster of emotions and feelings. An album to enjoy from start to finish, paying attention to detail as every sound on the records sums up to the overall meaning of the concept.'Evenings' will be released on vinyl LP by Glossy Mistakes on March 4th, 2022, with a remastering, by Damian Schwartz, from the original digital/cassette* release.

Parks, Tess
And Those Who Were Seen Dancing

Neutral Milk Hotel
In The Aeroplane Over The Sea