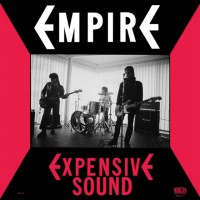 Empire was an offshoot of punk legends Generation X, very influential for the '80s Washington D.C. hardcore and UK neo-psychedelic scenes, acting somehow as the missing link between new wave and grunge. "Expensive Sound" was originally released in 1981, their music was raw, bare, warm - distinct from the glacial, antiseptic pop that would dominate the decade.While "Expensive Sound" may be better known for the bands it inspired - the neo-psychedia of The Stone Roses and the athletic fretwork of Fugazi - they deserve appreciation on its own merits: one of the finest guitar pop records of the era.TRACKLISTSide A1. EMPIRE2. HOT SEAT3. ELECTRIC GUITAR4. TURN IT ROUND5. TODAY6. EXPENSIVE SOUNDSide B1. SAFETY2. HIM OR ME3. ALL THESE THINGS4. NEW EMOTION5. STAND

Empire
Easy Life/enough Of The Same