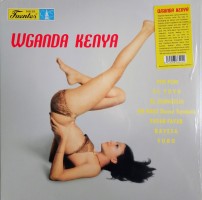 Repress!Wganda Kenya was a group formed by Discos Fuentes under the idea of developing an African and Caribbean sound in order to appeal to the Coste;o Colombian market and also inject a little international exoticism into the label.This 1976 album has become a collector's favorite waiting to be reissued, and it's not hard to understand why since it's full of so many Afro-Funk, Congolese rumba and Caribbean-flavored dance floor burners.Special edition reissue containing two non-album bonus tracks from the same period that appeared on 45s and various artist compilations, as well as an insert with liner notes. Pressed on 180g vinyl.First time reissue.TRACKLISTSide A1. EL EVANGELIO2. PIM POM3. AN NOUS DANSE TUMBELÉ4. YOROSide B1. EL YOYO2. BAYESA3. FAYAB FAYAB4. POR UNA NEGRITA (*)5. E UN MENE (*)(*) extra tracks