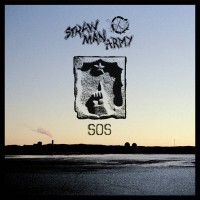 New York's Straw Man Army return with -SOS-, the follow-up to their 2020 debut LP, 'Age of Exile'. Emerging from the D4MT Labs group that also includes Kaleidoscope and Tower 7, Straw Man Army's delicate musical touch, embrace of melody, and rapid/fire, clearly articulated vocals separate them from the louder and noisier end of New York's fertile punk scene. While 'Age of Exile' examined the legacy of colonialism through the musical milieu of melodic anarcho-punk, 'SOS' turns its attention to the increasingly bleak prospects for the human race and planet earth. While Straw Man Army's lyrical approach remains dense and thought provoking on 'SOS', their musical scope grows wider, encompassing 'Age of Exile's' melodic take on anarcho, bleak and brooding post-punk, psychedelic instrumental excursions, and even the wistful pop of album highlight 'Beware'. 'SOS' is everything Straw Man Army's fans could have hoped for in a follow-up and so much more, cementing the band's status as one of the most original, exciting, and important groups in the contemporary punk underground.