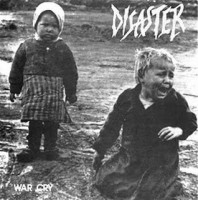 Repress on red vinyl. Originally released in 1991, Disaster was one of the first purely Discharge influenced bands to span what later become popularly known as D-beat. Hailing from Halifax, they were part of a new wave of raging UK bands who worshipped 'Why' as the finest piece on non-music ever recorded. Disaster faded into obscurity shortly after releasing their MLP and 'War Cry' became a cult record among raw hardcore fans worldwide counting visionaries as Kawakami from Disclose as one of their biggest fans. Comes with a 12 pages 11"x11" booklet containing flyers, pictures, interview and other memorabilia.

Backfire!
All Bets Are Off

Desperat
First Two And Half 7"