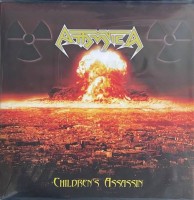 Solid black vinyl (180 grs.) limited to 200 copies. Atrocious cacophonic Thrash at the rawest form!! The debut demo 1986 from this devastating Brazilian unit for the first time on vinyl. If you're expecting the ballistic, well/trained assault of their latter works this is a completely different beast, what you get here is an utterly rough, radical overdose of Thrash in its most primordial shape, a pure outburst of chaotic violence forged in the early days of the South American Death & Thrash explosion. Most of the stuff included consists in embyonic versions of songs re-arranged and re-recorded on their s & t first full length (1987), what makes the difference on "Children's assassin" is a total DIY caveman recording and a sonic approach that leans more towards a filthy, blackened Metal territory and at times reminds of some pioneering Colombian Ultra-Metal warriors. Full colored A4 booklet with an extensive choice of rare photos from the band's beginning, flyers and memorabilia.