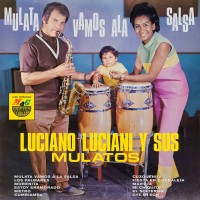 Italian migrant relocated to Peru Luciano Luciani put together an orchestra in 1968 which performed under the name Luciano y sus Mulatos after gaining a name as composer in that country.His debut album "Mulata, Vamos a la Salsa" was originally released on MAG in 1970, comprising mainly cumbias and also guaracha, son and salsa tracks, mainly Luciani's own compositions. This album also stands out for the vocals by guarachero Víctor Kiko Fuentes and Benny del Solar, the star of countless Peruvian tropical music recordings.The album also prompted Luciano Luciani's interest in the innovative recordings coming out of Spanish Harlem in New York that would be manifested in his later recordings for MAG in 1975.Reissued now for the first time, over 50 years after its original release, in 180g vinyl and including an insert with notes.RDS exclusive release.TRACKLISTSide A1. MULATA, VAMOS A LA SALSA2. LOS PALMARES3. MORENITA4. ESTOY ENAMORADO5. METRO6. CUMBIAMBASide B1. CUZQUEÑITA2. FIESTA EN CORRALEJA3. MARUJA4. MI CHIQUITA5. EL SOLTERON6. OYE MI SON