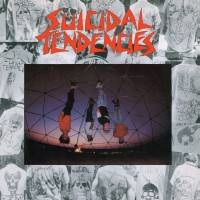 Suicidal Tendencies's debut has been regarded by critics as one of the most influential punk rock albums of all time and has inspired an untold number of influential musicians."Suicidal Tendencies" has also been cited as an influence or favorite album by each of the "big four" of thrash metal (Metallica, Megadeth, Slayer and Anthrax) as well as California punk bands such as The Offspring and NOFX.Red colored vinyl includes original lyric sheet.TRACKLISTSIDE A1 Suicide's An Alternative / You'll Be Sorry2 Two Sided Politics3 I Shot The Devil4 Subliminal5 Won't Fall In Love Today6 InstitutionalizedSIDE B1 Memories Of Tomorrow2 Possessed3 I Saw Your Mommy...4 Fascist Pig5 I Want More6 Suicidal Failure

Ejected
The Spirit Of Rebellion