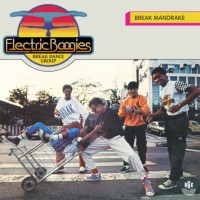 1984 Brazilian electro funk/early rap by Sao Paulo crew Electric Boogies, recorded under the influence of New York's B-Boy culture and local artists like Black Juniors, Villa Box.Following the success of the early Brazilian rap artists Black Juniors, Villa Box, Buffalo Girls. Electric Boogies emerged out of Sao Paulo, Brazil, as a crew devoted to breakdancing under the influence of New York's B-Boy culture.They would record "Break Mandrake" in 1984, originally released on RGE Records. This single has two fabulous electro-funk tracks, side A is vocal and on the flipside we find the instrumental version with some extra keys that give it a more jazzy touch. DJ Irai Campos would provide the scratches while the arrangements and keyboards were credited to Eduardo Assad, who also worked with Black Juniors, Sasha and others.First time vinyl reissue.TRACKLISTSide ABREAK MANDRAKE (Bene Alves)Side BELECTRIC BOOGIES (Eduardo Assad)