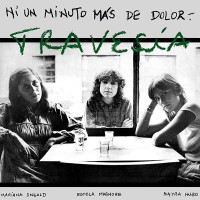 A new title in the series of full/album reissues that Vampisoul is releasing (co-produced in collaborationwith Little Butterfly Records) as a valuable addition to our largely acclaimed compilation "América Invertida", focusing on the obscure leftfield pop and experimental folk scene from 0s Uruguay, making some of these elusive and essential albums available again.Only album (1983) released by this all-female trio, Travesía, an essential asset of the effervescent scene ofexperimental Uruguayan artists who at the time mixed folklore, the avant-garde and pop under the influence of bossa nova and tropicalia.The minimalist instrumentation highlighted the trio-s complex and ethereal vocal arrangements resulting in a beautiful album, released almost forty years ago but that could have been made yesterday. Perfect listening for fans of the ethereal pop by artists like Antena or Les Disques Du Crépuscule's sound and lovers of vocal harmonies in the tradition of bands like Free Design.Travesía's members Mariana Ingold and Estela Magnone would later release outstanding solo albums that have also become very much in-demand in recent times.'Ni Un Minuto Más de Dolor' is reissued here on vinyl for the first time, in its original artwork (plus OBI) and including an insert with liner notes by the Uruguayan music journalist Andrés Torrón.TRACKLISTSide A1. EN ESTE MOMENTO2. ANDENES3. PARA4. UNA CANCION GRATUITA5. QUE LA PALABRA6. CARBON Y SALSide B1. LOS DOMINGOS2. AVALANCHA3. ALGUNOS REPROCHES4. DOS PARTES5. CLAROS6. ANA

Bench Press
Not The Past, Can't Be The Future