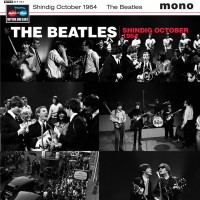 The Beatles filmed a live performance of three songs for the American variety TV show 'Shindig!' at the Granville Theatre in Fulham on October 3rd 1964. The entire episode was devoted to British acts and included on the bill were Sandie Shaw, PJ Proby, The Karl Denver Trio, Tommy Quickly, Sounds Incorporated and Lyn Cornell. The show features the first ever live performance of I'm A Loser: it was broadcast in the states by ABC on 7th October 1964, but strangely enough, was never shown in Britain. The audience consisted of specially invited members of the Beatles Fan Club but producer Jack Good thought they weren't loud enough, so he added the massed sound of American screaming girls to the mix but we feature here an alternate take of Kansas City without the added screams. The Beatles also appeared in the show's finale with Karl Denver.

Velvet Undergound
At The End Of Cole Ave-2nd Night (2xcd)