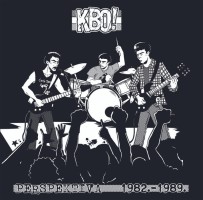 a collection of demo recordings from the beginning of the career of Kbo!, one of the best known punk/HC bands from Yugoslavia that belongs to the second, or rather third wave of Yugo punk. Starting back in 1982, in the following 7 years Kbo! became one of the leading Punk/HC bands in Yugoslavia alongside KUD Idijoti. They released a handful of demo tapes and only at the very end of the 80s had a chance to release their first full length on Greek label Wipe Out Records (Panx Romana, Stress, Anti, Chaos Generation,...). These recordings collected throughout the 80s show the band in their best moments. To top it all, the album comes with an 8 page fanzine that tells the band-s history until 1989 together with lyrics and a huge amount of pictures and flyers. If you are interested what the punk/HC scene was like in the 80s in Yugoslavia, this album is for you. The band has been playing for 35 years now and this is a great chance to learn how it all started back in 1982.

Gen Pop
On The Screen