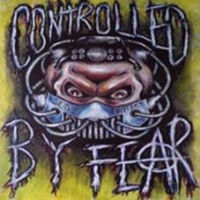 C.B.F. (CONTROLLED BY FEAR, pre-RUPTURE) formed in late 1988 with Andrew (Gus Chamber) on vocals, Matt (Stumblefuck) on guitar, Neal on bass and Matt on drums. The band lastet barely more than a year but played many gigs in Perth, Western Australia and were headlining shows towards the end of their short-lived career. Talentless amateur young Punk musicians, aged from 16 to 20, influenced by all sorts of bands from DOOM, G-ANX, FEAR OF GOD to CONFLICT started CONTROLLED BY FEAR, within time the band members'musical skills improved and the interest of some band members changed, CONTROLLED BY FEAR splitted up and bands like FAT LIP, NAILED DOWN, CUCHULAINN POWERHEAD and RUPTURE were formed. CONTROLLED BY FEAR played harsh, fast and raw Eighties Hardcore, Punk, sometimes reminding of later RUPTURE, but more chaotic and less under controll, over all it's total Noise that will attract the hearing impaired from all over the world.