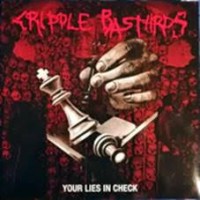 The debut full length by Italy's hate-filled Grindcore masters available again in a top quality edition! Originally recorded in 1995 and released in 1996, 'Your lies in check' is a 69 song tornado of ultra-violent Grindcore-Punk blasting at the speed of light!Quoting an older review of the album: 'With no shadow of doubt a milestone in Italian Grind/Hardcore and an important release also if seen on an international view. Over 7.000 copies sold if you sum the different LP/CD/MC versions around. Sixty-nine songs of pure hate in fourty-nine minutes. Grindcore of vile screams, guttural bellows and a lot of yelling. Music that is short, fast and to the point. Slow parts that are heavy and dirgey, showing no signs of fun. Superfast fastcore/Grind with a rocking Punk edge unique in its kind. Includes over the top anthems (Italia di merda, Stimmung, Prospettive limitate, 1974, Padroni, Images of war & Images of pain..) covered by plenty of bands worldwide'./ Audio re-transferred from the original reels and mastered at Toxic Basement Studio/ Original 1996 artwork restored and restyled/ Gatefold sleeve with lyrics, photos and a repro of the original poster