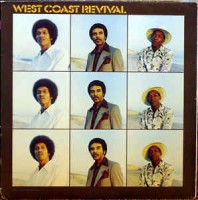 Seattle-born preacher's son Luther James Rabb played sax with Jimi Hendrix in the Velvetones and after forming popular horns-based rock act Ballin' Jack, moved to LosAngeles, where soul harmony trio West Coast Revival was born. Early singles for United Artists were produced by Howard Scott and Lonnie Jordan of War, and their sole LP, released in 1977, is an exceedingly rare soul-funk gem, with solid vocal harmony, hard funk breaks, and a touch of sophisticated strings. y Mind Is At Ease' is a breakbeat special and 'Feelin' Allright' rides a meaty bass groove, both underlining the War connection: our edition comes with bonus love song 'Beautiful Girl,' an early single B-side. Overall, this is prime soul-funk with uncommon elements, ripe for rediscovery by all discerning funk fans.

King, Clydie
Steal Your Love Away/ Rushing To Meet You