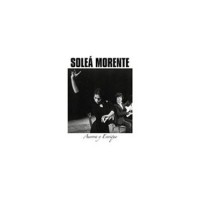 It is hard to reinvent yourself again and again. As time passes, it is more and more complicated to satisfy the expectations that have been set. That's why at a certain point, an artist, the kind with a capital A, needs to forge their own path. Because Soleá Morente has made an immense album. She already had a reputation for being a chameleon, and now she has taken a turn in a new direction that nobody was expecting. Towards unstable ground, dangerous for a singer of her caste and style. And she did it to talk about what she carries inside her, what we all wanted to know: what it's like to grow up in a house with Aurora Carbonell and Enrique Morente. And after the strength of an album as powerful as "Lo Que Te Falta", Soleá now brings us an intimate album, with references to shoegaze and dreampop, echoes of MAZZY STAR and BEACH HOUSE, and to top things off, for the first time, she has written the lyrics and music of each and every song herself. This is HER ALBUM.TRACKLIST01 Aurora 02 Ayer 03 Yo Y La Que Fui 04 El Pañuelo De Estrella (Feat. Estrella Morente) 05 Fe Ciega06 Domingos (Feat. Triángulo de Amor Bizarro) 07 Iba A Decirtelo 08 El Chinitas 09 Marcelo Criminal (Feat. Marcelo Criminal)10 Polvo Y Arena 11 Enrique