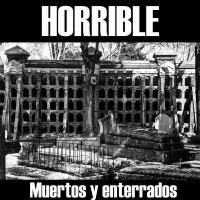 Formed in Madrid in 2017, HORRIBLE is the answer to all those new pseudo/grindcore bands that just play fast modern music without any knowledge about the real genre that infect the nowadays scene. Sick of modern bands, this duo entered the rehearsal place in 2017 and wrote 38 songs in less than 18 minutes of ultra primitive grindcore/noise influenced by bands as Fear of God, Warsore, Denak, Repulsion, old Agathocles, old Cripple Bastards, Splatterreah, Tumor, B.G.T., V.N.A, and the likes. Not modern metal sound, not modern blast beats, not hyper fast crust parts without feeling and heaviness and just a simple kick pedal, not double shit pedals here. Lyrically the bands stands against any human condition, hate towards any human thought&form. Released in a running of 300 copies in glorious black wax.