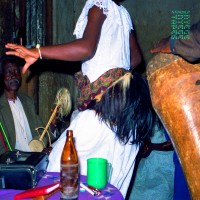 A traditional kingdom within the confines of the East African state of Uganda abolished under Idi Amin but restored officially in 1993, Buganda's royal courts played host to incredibly talented musicians dating back centuries. Linking in with a 2019 documentary film of the same name, 'Buganda Royal Music Revival' (released on the ever-impressive Nyege Nyege Tapes) captures these traditions as practiced by a dwindling handful of veteran musicians who've kept those skills alive.