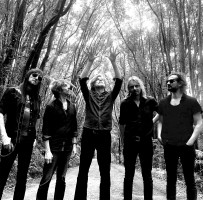 Perkins and his respected musician, songwriter, producer and bandmate Matt Walker share a mutual admiration of the American electric guitar innovator, whose iconic power chords in his signature 50s rock'n'roll instrumentals, had a profound influence on the evolution of rock guitar.The Fat Rubber Band is borned with this rare vinyl, the pair have enjoyed countless musical conversations over the decade while hanging out backstage and on the road.Walker offered the debut album's opening track, the wide-screen drama of "Pay The Devil's Due". Perkins responded with the plaintive blues of "My Philosophy". Walker replied with the album's fuzz driven debut single "Danger Has Been Kind" and Perkins countered with the glacially-paced, intimate "Poor Simple Minded Fool".The pair road-tested their works in progress as a duo before enlisting bassist Steve Hadley, drummer Roger Bergodaz and Evan Richards on percussion to complete the Fat Rubber Band line-up to record the album's ten tracks at Walker's Stovepipe Studios in Victoria's Dandenong Ranges."At Matt's studio - you open the door to the studio and nature floods in," Perkins says. "We wanted it to sound rural, to feel the dirt and the grass and the leaves."Even after all these decades, when you think you know that gravelly baritone inside out, Perkins finds new emotional tones in the service of the Fat Rubber Band's songs vivid narratives, with their characters wrestling, but sometimes dancing, with the tougher, darker qualities of the human condition. This is truly existential blues. Bubbling underneath those upfront vocals and raw harmonies are intricately entwined guitar conversations and unexpected percussive flourishes."Another aspect that we wanted was for the sound to be sometimes a collision and sometimes a marriage of acoustic and electric instruments. We wanted that tension between mandolins and bouzoukis meeting fuzz guitars.""We also considered percussion to be a vital element of the sound we were going for; we noticed in the recordings we loved from the 50s and 60s that often the tambourine hit, or the maracas, or whatever percussion, was right up there in the mix, right next to the vocal," Perkins says.

Whodunit
Memories From A Sh*t Hole

Bobo, Harlan T.
Too Much Love

Hipbone Slim & The Kneetremblers
Ain't Got A Leg To Stand On