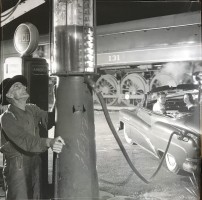 Originally released by Cooking Vinyl in 1993 this live album took songs from Hanks tour in the Spring of 1992. Taken straight from the desk with no mixing or overdubs they capture the band at their very best. With slow heart wrenching tracks such as 'Birmingham Motel' written by Reg Meuross to the danceable 'Get Rhythm' this LP is a must for anyone interested in Country music from an English musician with a clear passion for the genre. This rerelease has new cover artwork. It is an iconic black and white picture printed in full colour black ( additional cyan) by o Winston Link who is rated as the greatest railway photographer ever to record the passing of steam in the USA. The shot is called 'Sometime the Electricity Fails'