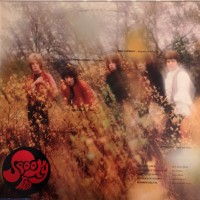 Reissue on vinyl for this full-length debut from British blues-rockers Spooky Tooth. It has a tone similar to Traffic with its psychedelic take on the influential pop and soul music of the '60s. A few cover tunes including Janis Ian's 'Society's Child' and the Nashville Teens' 'Tobacco Road' are included, but original songs like the soulful ballad 'It Hurts You So' and 'Bubbles' (with its Beach Boys sensibility) are the real standouts. The cheery, psychedelic 'It's All About a Roundabout' is the catchiest number by far. On this dreamy cut, vocalist&keyboardist Gary Wright demonstrates some sharp melodic and compositional instincts. Although Spooky Tooth eventually became better-known for their straightforward blues-rock, the trippy pop of It-s All About counts as a career highlight for the group. Fans of late-'60s British rock are definitely advised to check out this impressive release.

Vertice
I Want A Boogie/thinking On You