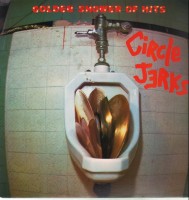 Golden Shower of Hits is the third studio album by American hardcore punk band Circle Jerks, released July 21, 1983 by the labels Allegiance and LAX Records. It was the band's last album to feature the band's original rhythm section of bassist Roger Rogerson and drummer Lucky Lehrer. Lehrer was fired from the group in the middle of recording the album, and John Ingram was hired to finish the recording. After their departures, the band's music took a different direction on their next studio album, Wonderful (1985).

Circle Jerks
My Career As A Jerk

Hard Skin
On The Balls (picture)

Cellophane Suckers
One In A Zoo