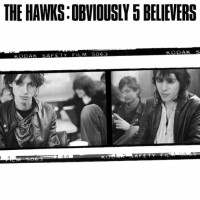 A short-lived quintet from Birmingham that counted one-time Duran Duran member Stephen 'Tin Tin' Duffy among their number, The Hawks dealt in rough, exciting post-punk around the turn of the Eighties but officially released just one single, ords Of Hope'. For fans of early Eighties indie like Television Personalities and Felt, this compilation bviously 5 Believers' - a Dylan song and one of the band's original names - gathers up ten tracks they recorded but never officially released.