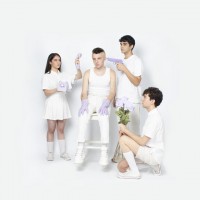 They are one of the more personal projects to come out of Madrid in a long time. Somehow, they are the heirs to that tradition of mixing risk, vanguard sound and pop melodies, with a taste for a specific esthetic and an artistic spirit that has marked bands like KRAFTWERK, THE RESIDENTS, STEREOLAB, OVIFORMIA SCI, Björk, PORTISHEAD, Ela Minus, DÉCIMA VICTIMA, Arca and so many others. That's why we wanted their debut album to have a physical release in line with the esthetic and musical content. INTERROGACION AMOR's first album, "vómito y mariposas", came out on September 16, 2020, when they were still a quartet formed by Yolanda Martín, Daniel Salgado, Carlos Martínez and Javier Sanz. One year later, the project has taken a turn, with just Carlos and Javier on board, and the end of the era confirmed with the release of "mariposas y vómito", an album that is a sort of reaction to the original, where all of the songs from the original are revised with the help of special guests like SHEGO, DANI, Valdivia, LISASINSON and GINEBRAS.TRACKLIST1 8.2 segundos2 Chicas guapas3 Chicos feos4 Tú y yo (Feat. Algo)5 Mentira6 Vómito7 Y mariposas8 Mala fama9 Canción de amor10 (Sin estar enamorado)

Reverse
Which Way Out