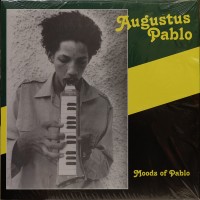 The man known as Augustus Pablo was a visionary, part of an intimate group of creative figures whose approach to reggae music and audio recording have forever changed the shape of popular music in Jamaica, and the echoes of his creative ingenuity have reached far beyond the island's shores. The enigmatic figure will always be most associated with his exceptional skills on the melodica, a plastic toy instrument that is used to teach schoolchildren the rudiments of keyboard melody, but his oeuvre encompassed so much more. In fact, the man was one of Jamaican music's most important record producers, as well as being a session keyboard player of considerable renown. Moods Of Pablo collects some individual moments of Pablo's work which somehow drifted into the orbit of Bunny Lee, a producer with his fingers always in a broad range of musical pies< futuristic cuts of "Queen of the Minstrel," "Hold On," "Fatty Fatty," "Heart Don't Leap," and "The Drifter" give way to ten thematic roots dubs from King Tubby's studio, each with melodica firmly in place, morphing rhythms such as "Barb Wire," "Everything I Own" and "Miss Wire Waist" into another dimension. A true Pablo classic pressed in a limited edition of 300 copies on yellow and green splatter vinyl for RSD 2019. Track list 1 Pablo-s Drifting Dub 2 Pablo-s Delightful Dub 3 Pablo-s Magnificent Dub 4 Hold On Pablo 5 Pablo-s Rockers Jam 6 King Tubby-s Musical Gorgon Dub 7 King Tubby-s Nah Jester Dub 8 King Tubby-s Rock Steady Dub 9 King Tubby-s Roots Vibe Dub 10 King Tubby-s Rule Supreme Dub 11 King Tubby-s Supercharge Dub 12 King Tubby-s The Dub Organiser 13 King Tubby-s Musical Stalowatt Dub 14 King Tubby-s The Professor Of Dub 15 King Tubby-s The Specialist In Dub