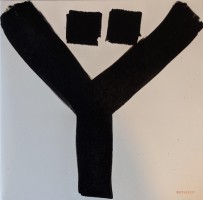 180g, black double vinyl, housed in a gatefold sleeve. Includes a 20pp fanzine and comes with a umbilical cord you have to cut before you are able to listen to the records.Whispers, rumbling, clattering, departure: The emotional as well as detail-laden music of one of Berlins most notable noise-rock duos may always convincingly strike you down, but it's about so much more than mere overwhelm. The new album 'Widergeburt' condenses the Dÿse principle like never before - an anthill of epic, small and damn wacky ideas. Dÿse, that band with the funny umlaut, was founded in the 2000s in Jena. Currently, Andrej and Jarii live in Berlin. When confronting yourself with the music of the two, you always come back to the central cornerstones: Attitude, intensity, D.I.Y., live, energy. Dÿse like to irritate the system, including their own, and that would not work without the humor that comes with it. So much for the starting point. If you really need more hard facts, please start a crowdfunding for a Dÿse biopic.

Attak
Murder In The Subway/future Dreams