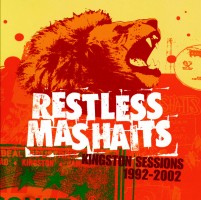 Restless Mashaits hailing from Geneva are based around the core of Jil and Stuf.They released a sizeable amount of new roots classics throughout the 90s and 2000's. This set comprises of the bulk of the instrumental sessions they recorded in Kingston, Jamaica in the mid/late 90 and early 2000's with legendary musicians such as Dean Fraser, Flabba Holt, DeadlyHeadly, Dwight Pinkney, Bongo Herman and more. Limited to 500 copies only.