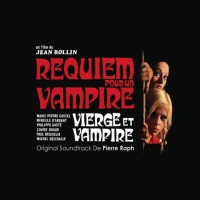 Comprising key scores by two of his regular collaborators, and bookending his most creative and lauded decade, the release of two original soundtracks to French director Jean Rollin's Fascination (1979) and Requiem Pour Un Vampire (1972) mark Finders Keepers' latest release in a series of tributes to 'France's first-ever vampire film director' and a long running patron of the Paris underground theatre, comic art and alternative literature movements. Having exploded onto French cinema screens in the midst of the Mai 68 riots with his freakish art house account of a disillusioned female blood cult Jean Rollin continued, throughout the next four decades, to extract the most bizarre and formidable art directors and musicians of the French underground and give them a platform combining the skills of street actors, Letterists, jazz musicians and fashion designers. Embracing video culture and adult entertainment in the late 70s Rollin's later films (under various guises) provide a treasure trove for lost electronic film music and homemade disco. This latest compendium combines the moody unsung European synth experiments of Pierre D'Aram and unreleased improvised free-rock of Pierre Raph, who have until this point never benefited the attentive audience that has come with a recent resurgence in modern macabre art-rock and experimental cold-pop, drone and improvised electronica. An early exponent of the growing trend of synthesizer music in horror soundtracks, Philippe D'Aram and his 1979 score for Jean Rollin's Fascination treads the same ground as early John Carpenter and Suzanne Ciani film music while maintaining an essential Gallic charm shared by a young Jean-Michelle Jarre or Philippe Besombes. His fusion of synthetic choral arrangements with bowed saws and subtle processed drones and tones sit comfortably next to the privately pressed new age synth movement of the coming decade and project further inspiration for the brooding neo-concrete of current outfits like Sunn O))), Demdike Stare et al. Previously unreleased in its entirety this is the first time that any of this music has been released on vinyl. Having previously provided music for an under the counter Rollin sex film called Jeunes Filles Impudiques the obscure Pierre Raph's energetic drum and organ based soundtrack for Requiem Pour Un Vampire from 1972 earns its place around the feet of other French Horrotica soundtracks like Francois De Roubaix?s Levre Rogues or British soundtracks to Psychomania by library music ensemble Frog. A perfect sister record to the soundtrack to Rollin's own Les Frisson Des Vampires by the short lived Acanthus - whom Pierre Raph promptly replaced (emerging from the same Parisian publishing company) for this freak rock ridden follow-up.

Various
Monsters Of The Midwest Vol.3