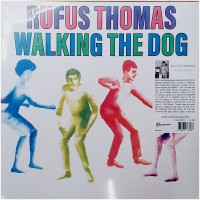 BACK IN STOCK! Born in rural Mississippi and associated with Memphis, versatile entertainer Rufus Thomas is a legendary figure, having been a tap-dancer, comedian, and DJ before recording for Satellite in 1961-the label that soon became Stax. Thomas' improvised hit, 'The Dog,' led to immortal follow-up, 'Walking The Dog,' so massively popular that it became the centrepiece of his debut LP, an irresistible blend of funk and soul with lashings of Thomas' trademark humour. Whether with originals or standards like 'Ya Ya' and 'Land Of 1,000 Dances', Thomas keeps the action tight and in addition to both 'Dog' hits, there is further instalment, 'Can Your Monkey Do The Dog,' co-penned with Stax's Steve Cropper. A killer set!

Little Bob And The Lollipops
Nobody But You