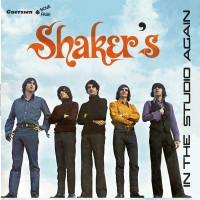 Following the split of Uruguay's top beat and psych band Los Shakers, ex-members Roberto 'Pelin' Capobianco and Carlos 'Caio' Vila continued with a five-piece called The Innocents. In 1971 that group released a lovely album, full of catchy, English sung tunes, built with delightful vocal harmonies, superb arrangements, Beatlesque baroque-pop vibes and, at times, with nods to proto power pop. However, instead of using the band's real name, the LP was issued - in Brazil and Argentina - under the Shaker's moniker, for obvious (commercial) reasons. Now that LP, entitled 'In The Studio Again', sees its first ever vinyl reissue, including reproduced artwork from the Brazilian edition, a heavy sleeve with obi, a 4-panel insert and the additional track 'See The Light', which originally only appeared on the Argentinian release. Wonderful!