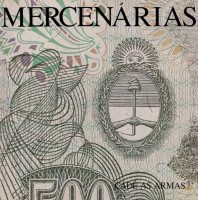 Finally, and after a lot of hard work Beat Generation fulfills the long lasting dream of re-releasing this gem, the legendary debut album by all girl Brazilian Punk / Post Punk band Os Mercenarias. Originally released in 1986 and long out of print, "Cadê As Armas?" is a mind- blowing gem waiting to be rediscovered, the amazing debut by a band in a state of absolute grace, with a very personal style and sound, great performances and so many amazing songs you'll have a really hard time picking a favorite. Includes fold out insert with notes and rare photos, pressed in 180 gr. Vinyl. A must!SIDE AMe Perco Polícia Imagem Inimigo Pânico SIDE BAmor Inimigo Loucos Sentimentos Labirintos Além Acima Santa Igreja