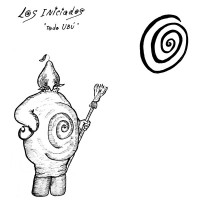 Dark minimal synth electronics and experimental sounds by Los Iniciados, a mysterious project -highly influenced by The Residents- related to legendary Spanish synth-pop band Aviador Dro. This is their rare and sought-after second album, originally released in 1983 on the DRO label as the soundtrack to a puppet stage play, based on Alfred Jarry's 'Ubu Roi'.

Knife
Tomorrow, In A Year (2lp)