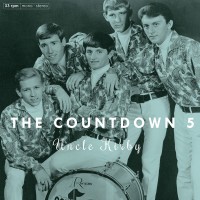 Galveston's psychedelic/garage band! Here's a compilation (1967-68) featuring a selection of their 45 sides from 1967-68 on Toucan and Cobblestone plus some amazing studio tracks which were never released at the time. Formed in Galveston in the mid-'60s, the Countdown 5 were one of the leading psychedelic/garage bands from Texas. 'Uncle Kirby' is focused on the psychedelic period of the band (1967-68), including their 7's in original mono mixes plus unreleased tracks which had never been released on vinyl before.

Townshend, Pete
Who I Am. Memorias

Outsiders
Monkey On Your Back/what's Wrong With You

Q65
World Of Bird/it Came To Me