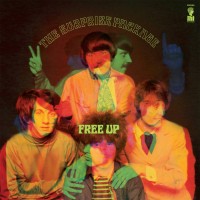 The Surprise Package was comprised of members from The Viceroys and The Galaxies. These two bands were regulars at regional teen fairs and often played alongside The Sonics and The Wailers.The Surprise Package recorded the album "Free Up" with Lee Hazlewood, featuring heavy fuzz guitar, rock organ, keyboard bass (like The Doors) and a fifteen-minute title track. Despite touring with the Beach Boys or Led Zeppelin, success did not knock their door.This release is the second installment of our new Lee Hazlewood Industries (LHI) Records Reissues Series.First ever vinyl reissue. Newly remastered from the original analog tapes by GRAMMY(R)-nominated engineer John Baldwin.Includes new interview with Surprise Package singer Rob Lowery and rare photos from the LHI archive. Q&A with Surprise Package member & GRAMMY(R)-nominated reissue producer Hunter Lea.TRACKLISTSide A1. New Way Home2. 100% Vision3. Break Away4. Supporting CastSide B1. Social Disease2. Free Up