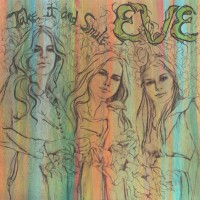 Munster Records is proud to present the first installment of the Lee Hazlewood Industries (LHI) Records Reissues Series with the first ever reissue of Eve's, "Take It And Smile".The ethereal harmonies of Eve were ever present, but the psychedelic girl group feel of their previous band,Honey Ltd, was replaced with funky grooves and a stoned country rock vibe that permeated Los Angeles in the early 1970s.First ever vinyl reissue. Newly remastered from the original analog tapes by GRAMMY(R)-nominated engineer John Baldwin.New interview with Laura Creamer, Temmer Darigan & Joan Glasser of Eve. Q&A with Eve & GRAMMY(R)-nominated reissue producer Hunter Lea.TRACKLISTSide A1. Lo And Behold2. I've Got A Secret3. Give A Hand4. Dusty Roads5. Anyone Who Had A HeartSide B1. You Go Your Way2. Hello L.A., Bye-Bye Birmingham3. Could You4. My Man Sunshine5. Take It And Smile

Eve
The Warrior/it Don't Matter To Me