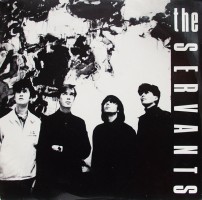 Formed by frontman David Westlake in the mid-Eighties and at one point counting future Auteurs hero Luke Haines in their line-up, The Servants were artful early embracers of a classically-influenced sound that would later be dubbed as Britpop. 'She's Always Hiding' was their debut single in 1986, and is reissued here via Optic Nerve's 7" single series. Recorded during the same session, 'Loggerheads' is on the B-side, as well as an alternative version of A-side itself.