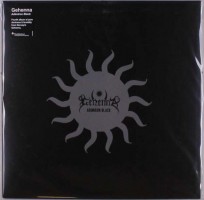 'Adimiron Black' was the band's fourth album, which originally surfaced in 1998, and edged further away from the earlier Black Metal Gothic-tinged symphonics to a more brutal crossover of Death and Black Metal, whilst still retaining a few of the band's trademark keyboard atmospherics. The result is often hailed as a highlight of the genre releases of the latter part of the 1990s. 180gm black vinyl edition with the original artwork under a black cover print.