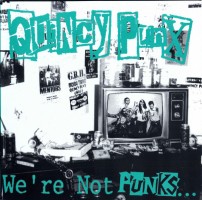 Remastered from the original DAT, Minneapolis's Quincy Punx's 1994 debut LP sees a re-issue from Dayton's Rad Girlfriend ... sounds fast, loud and better than ever. With songs like 'Blowin- Chunks' and 'Crack Lab in My Basement' you know you're in for a raucous good time. Inspired by their love for beer, classic punk rock, and cheesy '80's horror movies, Quincy Punx were founded in 1990, releasing several LPs and 7's before self-destructing a decade later. In that time they inspired a generation of crusty punks to shove a safety pin through their face and start their own bands. More than 25 years later, the Quincy Punx first album will get a chance to inspire a whole new generation of punk kids to do the same.