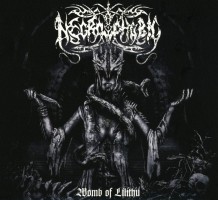 Formed in 1989, the highly influential Necrophobic is widely regarded as pioneers of Swedish black&death metal and a band that has directly inspired many of the country-s most renowned metal exports such as Watain, Shining and Nagflar. Necrophobic stood apart from their contemporaries by combining haunting melodies with the harsher aspects of death and black metal-s aggression. Combining their crushing trademark guitar riffing with the masterful vitriolic vocals of Tobias Sidegard and a surprisingly modern production that gives this album heavy volume and a cutting edge, Womb of Lilithu is a strong reminder that Necrophobic is still far from ready to abdicate from the Swedish black death throne for any young pretender. All hail to the kings of Swedish darkness!

Accused
The Curse Of Martha Splatterhead