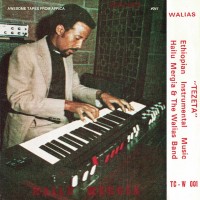 Hailu Mergia And The Walias Band were one of Ethiopian music's most influential and important figures in the mid-Seventies, the first to operate independently of the theatre and hotel circuit and tour internationally. 'Tezeta', originally recorded and released in 1975 and putting kinetic, funky spins on standards and contemporary pop, has been nigh-on impossible to find until this remastered edition via Awesome Tapes From Africa.