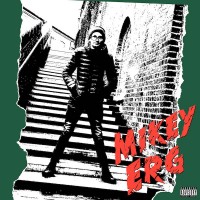 The legendary Mikey Erg is back with his self-proclaimed 'return to punk' on his brand new S&T LP released on Rad Girlfriend Records. Blasting through 10 songs in 26 minutes, Mikey returns to his roots on 's/t' mixing his classic pop-punk stylings with heavy distorted guitars and melodies. Everything you loved about 90's flavor punk rock is alive and well in these 10 songs. He's also included some surprises along the way. Mikey's list of accolades are extensive, beginning with Dirt Bike Annie, Mike was most well-known for drumming and singing in The Ergs. His time in music has lead him to be involved in such projects as The Measure (SA), Star Fucking Hipsters, House Boat, and Worriers literally just to name a few. He spent time in the house band for the Chris Gethard TV show and he's worked with every important punk rock label in the last two decades. This new record is a culmination of all of those things and Mikey's strongest and catchiest material to date. Rad Girlfriend is lucky and honored to have Mikey Erg aboard.

Stars And Stripes
Shaved For Battle