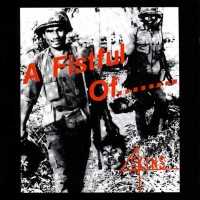 Hailing from London's working class East End, The 4-Skins formed in 1979 at the very onset of Oi! music. By the time this, their 2nd full length, was released in 1983 by the Syndicate Records label, the group had gone through numerous line-up changes and were now sporting a heavier, more melodic, hard rock-based sound fronted by ex-Last Resort vocalist, Roi Pearce. One of the hardest hitting punk albums of the 0s A Fistful Of 4-Skins is reissued here on LP with 2 tracks ("On The Streets" from the son Of Oi!' compilation and a demo version of saturday') added as bonus!